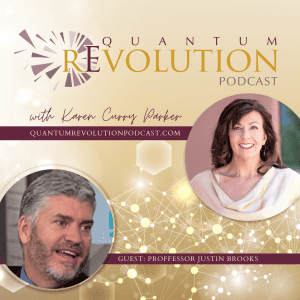 Todays’ Quantum Revolution podcast is a little different than some of our previous episodes.  We usually focus on the relationship between science and spirituality.

This season we have expanded our carefully curated group of guests to include other kinds of Quantum Revolutionaries.  From innovative social activists like Frank Schaeffer, to experts leading the charge on criminal justice reform, like today’s guest, Justin Brooks.

In this episode we’re going to look at the judicial system and explore the question, what happens when you’re imprisoned for a crime you didn’t commit – and is the penal system actually fulfilling its purpose of rehabilitation and equitable punishment?

When confronting outdated and discriminatory systems, it requires creativity to find the solutions that work within the confines of a dysfunctional system and eventually discovering the solutions to transforming the system into something more equitable and sustainable.  Today’s guest, Justin Brooks, is the embodiment of this kind of disruptive and compassionate creativity.

Decades of research have shown that prison is the least effective place to rehabilitate offenders. Studies have indicated that a stint in prison increases the likelihood that inmates will reoffend.  Many inmates start off as young offenders who are deeply traumatized and become more traumatized by a system that clearly does not work.

What would a just judiciary system look like?  How could we better rehabilitate people who commit crimes so that they can be reintroduced back into society as healed individuals?  How do we tackle racism in the current system?  These are the questions we must be asking as a society.

We might not have the answer to these questions yet, but it’s time we start imagining new possibilities.  And then taking the incremental steps as they appear in front of us.

One step you can take today is to visit californiainnocenceproject.org and make a donation.  Your contribution is used to help innocent people get off death row.

Justin Brooks is the Director and Co-Founder of the California Innocence Project. He has practiced as a criminal defense attorney in Washington D.C., Michigan, and Illinois. Over the course of his career he has served as counsel on several high-profile criminal cases, including the Brian Banks case which was the subject of an award winning movie, Brian Banks, in 2018.

He has been recognized several times by the Los Angeles Daily Journal as one of the Top 100 Lawyers in California. In 2010 and 2012, California Lawyer Magazine recognized him with the “Lawyer of the Year” award.

Justin has dedicated most of his professional – and personal – life to overturning wrongful convictions.  His passion has spurred him to create Innocence Projects all over the world and to train young lawyers to work to help free innocent people and transform the judicial system.

Thank you for joining me for Quantum Revolution.  Please be sure to subscribe to this podcast on your favorite platform or visits us at quantumrevolutionpodcast.com so you don’t miss any of the amazing shows we have in store for you. Make sure to join us next week when we’ll be talking to Flora Bowley about combining creative expression and intuitive wisdom.

If you would like to learn more about how you can connect to your innate wisdom and live a life rooted in well-being, please visit our website at quantumalignmentsystem.com

No archives to show.